The Unlikely Odyssey of a Presidential Relic

Brooks Brothers crafted Abraham Lincoln’s greatcoat in honor of the president’s second inauguration. The coat’s wool was “finer than cashmere.” Its quilted silk lining bore an embroidered banner that read, “One Country, One Destiny.” Lincoln wore the garment when he was assassinated on April 14, 1865. After his death, Mrs. Lincoln gave the greatcoat to a faithful doorkeeper. The coat was returned to Ford’s Theatre more than a century after her bequest, but not before it underwent a mysterious journey. This book recounts that journey as a reminder of the 16th president and his call to “bind up wounds” and care for others.

Reignette G. Chilton is an independent researcher and author. Her work about Lincoln’s greatcoat can be found in the Gannett Press, Surratt Courier and the Abraham Lincoln Association’s newsletter, For the People. She lives in historic Morristown, New Jersey.

“How often museum visitors wished for more stories about a special object they found in an exhibition. Abraham Lincoln left few items reflecting the person he really was. Reignette Chilton tells the story of this classic Brooks Brothers’ coat customized for the controversial president leading the nation through Civil War. She shows this coat’s convoluted life connected to President Lincoln and how his memory has been central to how Americans see themselves.”—Thomas D. Mackie Jr., Ph.D., former director of the Abraham Lincoln Library and Museum, Harrogate Tennessee. 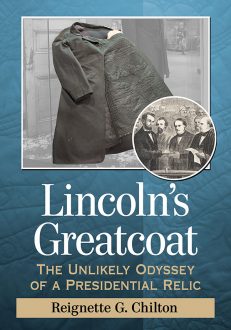