The winter of 1917–18 found the United States in a general upheaval. A large percentage of the world’s population was at war and the United States itself was fully occupied with an unprecedented mass mobilization of its military forces, which were rushing headlong into an era of modern warfare. It was in this setting that the Liberty Theatres were opened. Created by the War Department’s Commission on Training Camp Activities, these theatres aimed to produce “morally uplifting” plays and movies as a form of entertainment for thousands of troops—ideally proving more effective than policing the camps. In actuality, however, Liberty Theatres became little more than public relations ploys. Ultimately, although the theatres endeavored to provide a constructive form of recreation and diversion, they—and CTCA—fell far short of what had been promised.
Compiled from a variety of government documents, camp newspapers and entertainment trade journals, this volume provides an in-depth look at the 42 Liberty Theatres created by the War Department during 1918 and 1919. It discusses the way in which these theatres were designed and run as well as the relationship between CTCA’s somewhat idealistic leaders and the theatrical professionals who handled this day-to-day operation. Setting the military and the American theatre within their respective historical contexts, the book also explores the role of Liberty Theatres with regard to both entities. Appendices contain a listing of Liberty Theatre opening and closing dates; Liberty Theatre expenses; gross receipts and estimates of attendance; and the average weekly receipts of Liberty Theatres.

Weldon B. Durham is an emeritus professor of Theatre at the University of Missouri-Columbia. He is the general editor of and chief contributor to American Theatre Companies and the author of numerous articles and reviews in professional journals in the field of theatre history and criticism. He lives in Covington, Georgia.

1. The American Theatre and the U.S. Army on the Threshold of Modernity      9

4. The Purpose and Form of the Commission on Training Camp Activities      36

13. The Federal Government and the Entertainment Industry      156

15. Amateurs and Professionals: Conscience and Commerce      171 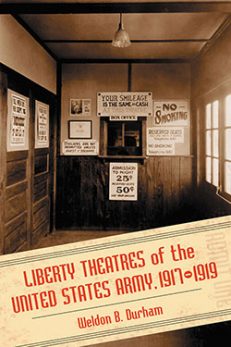