In this candid retrospective of the disco era, 40 men and women who reigned over the dance music industry of the 1970s and 1980s recall their lives and careers before, during and after the genre’s explosion. Artists interviewed include Alfa Anderson, formerly of Chic (“Good Times”); Ed Cermanski and Robert Upchurch of The Trammps (“Disco Inferno”); Sarah Dash (“Sinner Man”); producer John Davis (“Ain’t That Enough for You”); Janice Marie Johnson of A Taste of Honey (“Boogie Oogie Oogie”); France Joli (“Come to Me”); Denis LePage of Lime (“Babe, We’re Gonna Love Tonite”); Randy Jones of the Village People (“Y.M.C.A.”); Rob Parissi of Wild Cherry (“Play That Funky Music”); producer Warren Schatz (“Turn the Beat Around”); Debbie, Joni and Kim Sledge of Sister Sledge (“We Are Family”); and many more.

James Arena is a New York-based author, host and commentator who has been featured on MSNBC, Fox, SiriusXM and other networks. He is the author of the pop culture books Fright Night on Channel 9, First Ladies of Disco and Legends of Disco and a recipient of a G.E.M.A. Foundation/City of Philadelphia award for preserving dance music history.

Professionals Behind the Scenes 7

Clare Bathé, formerly of Machine—“There But for the Grace of God Go I” 36

Ed Cermanski and Robert Upchurch of the Trammps—“Disco Inferno” 46

John Davis—“Ain’t That Enough for You” 59

Shirley Jones, formerly of the Jones Girls—“You Gonna Make Me Love Somebody Else” 130

Bonnie Pointer—“Heaven Must Have Sent You” 182

Warren Schatz—“Turn the Beat Around” 190

“If you James [Arena], you know how much disco music means to him. It has been a passion and true love that has remained with him for decades…. I encourage all who love disco music and its personalities to pick up this book. It is the perfect record of note giving you a first rate education on the lives, past and present, of some of the greatest entertainers in the music’s history. Disco is not dead, its been immortalized within the pages of Legends of Disco, and we all should be thankful and grateful to James Arena.”—Beatselector Magazine; “James Arena’s passion for capturing the history of disco is not only interesting to discover, but a worthwhile discovery of all the artists who created all those ‘good times.’”—Edge Media Network. 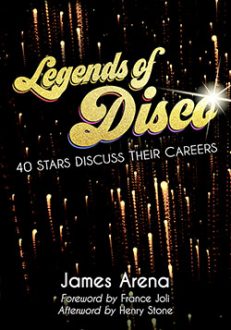