Widespread law enforcement or formal policing outside of cities appeared in the early 20th century around the same time the early film industry was developing—the two evolved in tandem, intersecting in meaningful ways. Much scholarship has focused on portrayals of the criminal in early American cinema, yet little has been written about depictions of the criminal’s antagonist. This history examines how different on-screen representations shifted public perception of law enforcement—initially seen as a suspicious or intrusive institution, then as a power for the common good.

George Beck (Ph.D., History & Culture, Drew University) is a police sergeant, award-winning journalist, editor-in-chief of Blue Magazine and an adjunct professor at Fairleigh Dickinson University and the College of Saint Elizabeth. He lives in New Jersey. 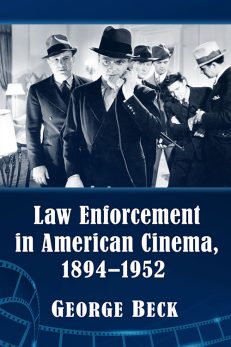