Last of the Cowboy Heroes

The Westerns of Randolph Scott, Joel McCrea, and Audie Murphy

In the world of Western films, Randolph Scott, Joel McCrea, and Audie Murphy have frequently been overlooked in favor of names like Roy Rogers and John Wayne. Yet these three actors played a crucial role in the changing environment of the post–World War II Western, and, in the process, made many excellent middle-budget films that are still a pleasure to watch.
This account of these three Western stars’ careers begins in 1946, when Scott and McCrea committed themselves to the Western roles they would play for nearly twenty years. Murphy, who also joined them in 1946, would continue his Western career for a few years after his cohorts rode into the film sunset. Arranged chronologically, and balanced among the three actors, the text concludes with Audie Murphy’s last Western in 1967. Covering both the personal and professional lives of these three Hollywood cowboys, the book provides both their stories and the story of a Hollywood whose attitude toward the Western was in a time of transition and transformation. The text is complemented by 60 photographs and a filmography for each of the three.

Robert Nott is a staff writer for The Santa Fe New Mexican. He lives in Santa Fe, New Mexico. 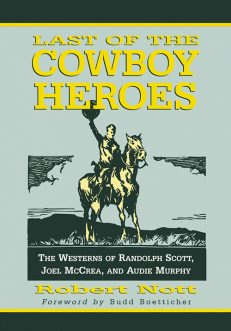 You're viewing: Last of the Cowboy Heroes $29.95
Add to cart