Land Campaigns of the Civil War

This campaign-by-campaign analysis of the War Between the States presents the action from the opening shots at Fort Sumter to the furled flags at Appomattox. Battles both obscure and famous are examined in detail, covering each army’s move and countermove. Commentary is provided on the individual battles with attention to the role each conflict played in the greater scheme of the campaign and the war. The chronological arrangement of the campaigns allows for ready reference regarding a single event or an entire series of campaigns. The text is both clear and thorough, focusing on strategy and military successes and failures. An introduction to the events leading up to the war lays the groundwork for the military analysis. Maps and an index are also included.

Paul Calore has written on the causes of the Civil War, as well as books about its naval and land campaigns. He is a supporting member of the Civil War Preservation Trust, and lives in Seekonk, Massachusetts.

“understandable and easily readable…clearly-drawn maps…excellent…quick reference”—Council on National Literatures; “very worthwhile”—The Civil War Courier; “clear and thorough”—Civil War Campaigns; “a campaign-by-campaign analysis of the War Between the States which examines obscure and famous battles in chronological order, including the characters involved, each army’s move and countermove, and commentary on the role each conflict played in the war”—Reference & Research Book News. 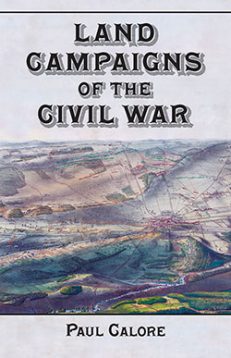 You're viewing: Land Campaigns of the Civil War $29.95
Add to cart