The Career of Gypsy Rose Lee

A brilliant woman who happened to disrobe for a living, Gypsy Rose Lee was commonly known as the “intellectual stripper.” Born Rose Louise Hovick in 1911, she had meager beginnings, no formal education, and a mentally ill stage mother who criticized and demeaned her daughter. Despite these hurdles, Gypsy climbed to the peak of every career she tackled: she triumphed as an actress, novelist, playwright, artist, political activist, and, ultimately, a star. Appendices cover Gypsy’s will and estate, the original production and Broadway revivals of her play Gypsy, and complete filmographies and discographies. The book contains many rare and never-before-published photographs.

“is chock full of photos and fascinating details of the legendary stripper and entertainer’s life”—gaychicagonews.com; “Robert Strom has written the most complete, well-researched account of my mother’s career—a “must have” reference for anyone interested in Gypsy Rose Lee. And the photographs delight. Many of them have never been published; some I’ve never even seen; all will return you to an era of show business when glamour reigned supreme.”—Erik Preminger, son of Gypsy Rose Lee 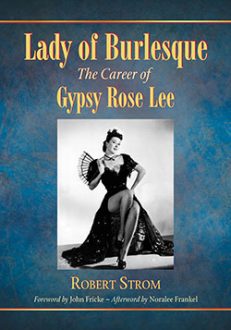