In the late 19th century, baseball players broke from the established leagues and organized their own Players’ League. They believed that this rival organization would make wages subject to market conditions and give players more mastery over their careers and industry. Although the league lasted only one year, it was a significant attempt by skilled workers to break from an established monopoly, gain more control over all aspects of their industry, and reap a larger portion of the revenues that they created.
This work explores the early history of professional baseball in the United States, the factors that contributed to the player rebellion of 1890, and the rebellion’s impact on the player-owner relationship in the decade that followed. Appendices include a roster of the 1869 Cincinnati Red Stockings (players, positions, and salaries); the First Reserve Agreement, Section 18 of the Standard Player’s Contract; and commentary and legal documents pertaining to the Reserve Rule.

Robert P. Gelzheiser is a retired history teacher. He lives in Venice, Florida.

1. The Origins of Professional Baseball in the United States      7

2. The Development of the American Association and the National League of Professional Base Ball Clubs: Baseball Becomes Big Business      20

3. The Player/Owner Relationship in the Mature Baseball Industry      35

4. Business and Labor in the 19th Century: The Changing Relationship in the Baseball Industry      53

6. The Formation and Development of the Brotherhood of Professional Base Ball Players      84

Appendix 5: David Newberger’s (Lawyer for the Brotherhood) Argument Against the Reserve Rule      180

“Robert P. Gelzheiser has written a gem of a book. Backed by impressive research and beautifully and fluidly written, the topic has never been better covered…a joy to read. His fascinating book is brimming with insight and deeply researched detail…let us welcome Robert P. Gelzheiser to the ranks of top baseball historians, for he has produced an extraordinary work”—Swans Commentary. 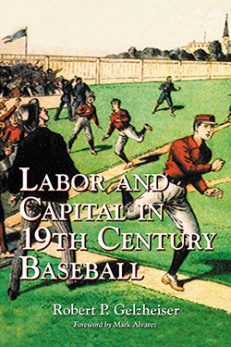 You're viewing: Labor and Capital in 19th Century Baseball $29.95
Add to cart