Kosciuszko, We Are Here!

American Pilots of the Kosciuszko Squadron in Defense of Poland, 1919–1921

Poland was in ruins after World War I. The fighting front had rolled through some areas more than seven different times, and the result was the almost complete destruction of the roads, railways, bridges, water systems, and power plants. The government was based mainly on civil servants of Polish descent who remained on the job after the fall of Germany, Russia, and Austria-Hungary. Even after Poland regained her independence in 1918, the borders were not yet defined and the nation was vulnerable to continued threats from Germany and Russia.
This work presents the story of the Kosciuszko Squadron, a small group of American flyers that formed without the support of the State Department and the American Expeditionary Force in Europe, to defend Poland from the Bolshevik armies and to prevent the communist revolution in Russia from uniting with a Germany frustrated by provisions of the Treaty of Versaille.
The book covers the events leading up to the formation of the squadron and the first efforts to enlist American military help for Poland in 1918. It explores why that small group of Americans felt compelled to fight for Poland and what they knew about who and what they were fighting for and against, and discusses the people, events, and issues that figured prominently in the war. The Squadron was named, of course, in honor of Tadeusz Kosciuszko, who famously came from Poland in 1776 to join the Colonial forces fighting the War of Independence from Britain.

Janusz Cisek is a professor at the chair of European Studies, Jagiellonian University, formerly Deputy Mayor of his hometown Stalowa Wola and Deputy Director of the Department of International Relations and European Integration at the Ministry of Culture and National Heritage in Warsaw, Poland. He is the author of Polish Refugees and the Polish American Immigration and Relief Committee (2005) and also lives in New York City. 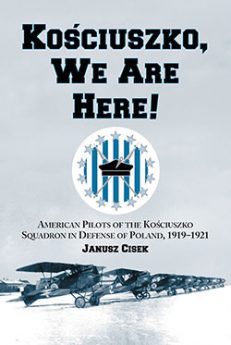