A Life at the Center of California Politics and Justice

This is the first biography of Stanley Mosk (1912–2001), iconic protector of civil rights and civil liberties during his 37 years as a justice of the Supreme Court of California (1964 to 2001). He had quickly risen as a well liked leader among Los Angeles reformers, as executive secretary to California governor Culbert Olson and then 16 years as a superior court judge. His 1958 election and service as state attorney general soon won national attention and the promise of likely election to the U.S. Senate, but an unexpected campaign twist augured a new course. This book frames Mosk’s Supreme Court years and the landmark cases in which his opinions or biting dissents continue to resonate.

Jacqueline R. Braitman, formerly with the department of history and The Center for the Study of Woman at the University of California, Los Angeles, has published widely on partisan women and has served as the assistant executive director of the California Supreme Court Historical Society.
Gerald F. Uelmen is a professor of law (and former law school dean) at Santa Clara University. Past president of the California Academy of Appellate Lawyers, California Attorneys for Criminal Justice and California Catholic Lawyers Against the Death Penalty, he chairs the editorial advisory committee for California Lawyer.

“scholarly and spirited”—Jewish Journal; “a well-researched and engrossing narrative…engaging account…a well written biography that will grab your attention and hold it captive”—L.A. Daily Journal; “Stanley Mosk’s lengthy career in public service as a courageous trial judge, masterful politician, forceful attorney general, and brilliant jurist on California’s high court will long be remembered. I look forward to reading Braitman and Uelmen’s invaluable account of the life of this remarkable man.”—Ronald M. George, 27th Chief Justice of California (retired); “With the publication of this biography, the transformative career and fundamental likeability of Justice Mosk now fully becomes part of the permanent record.”—Kevin Starr, Professor of History, U.S.C.; Author of Americans and the California Dream. 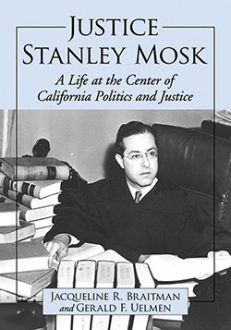