John Todd and the Underground Railroad

Biography of an Iowa Abolitionist

Born November 10, 1818, John Todd grew up in the rural area surrounding Harrisburg, Pennsylvania. The most formative experience of his life was attending college in Oberlin, Ohio. A one-of-a-kind educational institution, Oberlin College was fully integrated—allowing men and women, black and white, to attend the same classes—at a time when the entire country was in a racial upheaval. As a result, Oberlin turned out a group of men and women almost devoid of racial prejudice. It was from this pool of graduates that many of the founders of Tabor, Iowa, were drawn. They were determined to found an Oberlin-like college in the westernmost territory of the United States, so it was no surprise that this group quickly became active in the Underground Railroad and other abolitionist activities.
This biography details the life of the Reverend John Todd and presents the story of the Underground Railroad Station in Tabor. With the life of Todd as a common thread, the book explores how the station began and the noble purposes behind its birth. From the beginning of Todd’s career at Oberlin College, the book follows him from an unsatisfying first pastorate to the site of his life’s work in Tabor, where he would provide spiritual guidance and leadership, along with friend George Gaston, for the settlement. The work covers the prewar construction of the Tabor Literary Institute, which was beset by financial and administrative difficulties from the beginning. With a singleness of purpose spurred on by Todd and Gaston, the residents of Tabor joined in the abolitionist movement through participation not only in the Underground Railroad but in the Jim Lane Trail and Kansas Free State Movement as well. John Brown was in and out of Tabor on many occasions, bringing escaped slaves with him. Todd’s service in the Union Army and jubilation with the Federal victory are also discussed. An appendix contains various letters and documents pertaining to the Todd family, the Underground Railroad and other abolitionist activities.

“But when he tells the story of John Todd and the Underground Railroad in southwest Iowa, events with which he is intimately familiar, Morgans is at his best”—The Annals of Iowa. 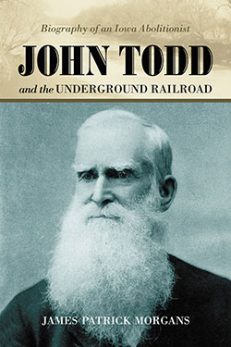 You're viewing: John Todd and the Underground Railroad $29.95
Add to cart