In 1733, John Paul Zenger began to print the New York Journal, the newspaper that was to change Zenger’s life and the direction of journalism in colonial America. The material published in the Journal so incensed Sir William Cosby, the royal governor, that Zenger was arrested for seditious libel. Zenger’s case was taken on by Andrew Hamilton, the foremost lawyer in the colonies, and after several months in prison the printer was found innocent. The case became a landmark of journalistic freedom, establishing that truth was the ultimate defense against charges of slander or libel, and was both emblem and incitement of America’s belief in a free press. This work traces Zenger’s life, the development of what was to become the U.S. Constitution’s First Amendment freedom in the colonies, and its subsequent evolution on both sides of the Atlantic.

William Lowell Putnam served as vice chairman of the Association of Maximum Service Telecasters, among his multitude of other professional credits. He is the sole trustee of the Lowell Observatory and lives in Flagstaff, Arizona. 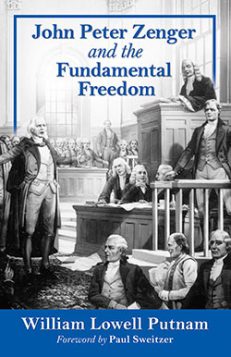 You're viewing: John Peter Zenger and the Fundamental Freedom $29.95
Add to cart