Over more than six decades and 200 films, supreme movie villain John Carradine defined the job of the character actor, running the gamut from preacher Casey of The Grapes of Wrath to his classic Count Dracula of House of Frankenstein and House of Dracula. But for every Prisoner of Shark Island or Jesse James, Carradine—who also did great work on Broadway and the classical theater (he produced, directed and starred in Hamlet)—hammed it up in scores of “B” and “C” horror and exploitation films, developing the while quite a reputation for scandal. Through it all, though, he remained a survivor and a true professional.
This is the first ever work devoted exclusively to the films of John Carradine. In addition to the comprehensive filmography, there is a biography of Carradine (contributed by Gregory Mank), commentary on the man by indie film director Fred Olen Ray (who helmed many latter-day Carradine movies), and an interesting piece by director Joe Dante, who writes about Carradine’s involvement in Dante’s 1981 werewolf movie The Howling. 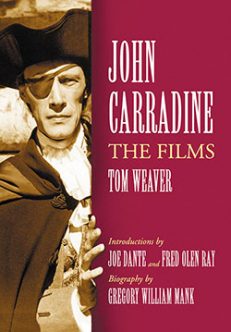