John Adams and the American Press

Politics and Journalism at the Birth of the Republic

This interesting study of the early American press and President John Adams first discusses the fourth estate’s treatment of President George Washington. The newspapers of the day, alien in both form and content to today’s publications, are also covered. The confrontational relationship between Adams and editors is examined, focusing on the President’s personality, the “honeymoon” at the beginning of his administration, the increasing politicization of editorial scrutiny, and the role of the press in Adams’ close electoral defeat by Thomas Jefferson. Using Adams’ voluminous correspondence, an analysis of his own views of press coverage concludes the work.

Writer and lecturer Walt Brown lives in Hillsdale, New Jersey. He has also written detective novels, a series of ebooks on John F. Kennedy and appears regularly as a political commentator. 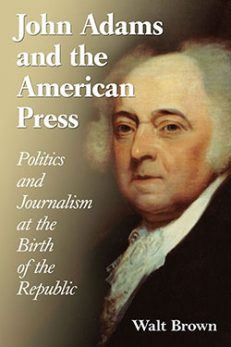 You're viewing: John Adams and the American Press $29.95
Add to cart