Letters 1923–1939: ESP and the Foundations of Parapsychology

During the 1930s a new approach to exploring human consciousness began at Duke University with Professor J. B. Rhine’s experimental research on extra-sensory perception, or ESP. His findings on telepathy, clairvoyance, precognition and psychokinesis challenged conventional disbelief. Rhine’s findings and his first popular book, New Frontiers of the Mind, ignited excitement and controversy—among not only scientists but the public at large.

Rhine’s letters chronicle his efforts to find reliable evidence of psychic ability, from the séance room to psychic animals and finally to a university research laboratory.

Covering the years 1923–1939, they reveal a gripping story of groundbreaking research, told in the words of the main player as he worked with his team, subjects, critics and supporters alike.

Barbara Ensrud is a freelance journalist and author based in Durham, North Carolina. Her articles have appeared in numerous periodicals including the Wall Street Journal and online Psi Encyclopedia. A member of the board of directors of the Rhine Research Center since 2014, she served as president of the board from 2016 to 2020.

Sally Rhine Feather, the eldest daughter of J.B. and Louisa Rhine, worked as a clinical psychologist for several decades and in 1995 served as executive director of the Rhine Research Center and continues today as executive director emeritus. In 2010 she received the Outstanding Career Award from the international Parapsychological Association. She lives in Durham, North Carolina.

• “This remarkable collection of J. B. Rhine’s letters provides a panorama of his early interest in psychic phenomena and its evolution over three decades. It is marked by his careful articulation and descriptions, his modesty and sense of humor, as well as his open-mindedness was balanced by his scientific analysis… This opus is of inestimable value as it details the scientific and intellectual progress made by, arguably, one of the 20th century’s most important pioneers of science.”—Stanley Krippner, editor of the Advances in Parapsychologial Research series 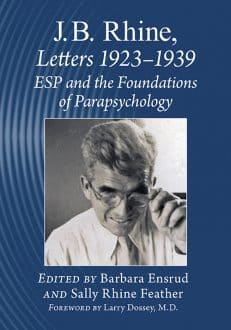