Jason and the Argonauts through the Ages

The story of Jason and the Argonauts is one of the most famous in Greek myth, and its development from the oldest layers of Greek mythology down to the modern age encapsulates the dramatic changes in faith, power and culture that Western civilization has seen over the past three millennia. From the Bronze Age to the Classical Age, from the medieval world to today, the Jason story has been told and retold with new stories, details and meanings. This book explores the epic history of a colorful myth and probes the most ancient origins of the quest for the Golden Fleece—a quest that takes us to the very dawn of Greek religion and its close relationship with Near Eastern peoples and cultures.

Jason Colavito is also a frequent contributor to Skeptic magazine, and has earned praise from Archaeology magazine for his archaeology writing. He lives in Albany, New York and can be found online at www.JasonColavito.com.

Part Two: Development of the Myth

Part Three: The Myth in Context

7. The Traveler: The Descent into the Underworld  146

8. The Occultist: Magic, Monsters, and the Golden Fleece  169

Part Four: The Afterlife of the Myth

9. The Knight: The Middle Ages and the Renaissance  194

11. The Symbol: Scholarly Investigations and Theories  236

“thorough and engaging…entertaining and informative…a rich compendium of materials”—Library Journal; “If I had to reduce my entire Argonaut library to one single book, Jason and the Argonauts through the Ages, published by McFarland would undoubtedly be the tome I would choose to keep”—Hercules Invictus; “solid research”—ProtoView. 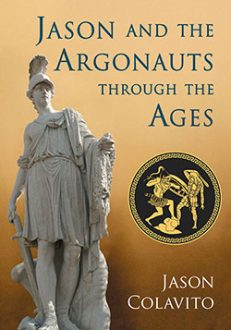 You're viewing: Jason and the Argonauts through the Ages $39.95
Add to cart