There is no cinema with such effect as that of the hallucinatory Italian horror film. From Riccardo Freda’s I Vampiri in 1956 to Il Cartaio in 2004, this work recounts the origins of the genre, celebrates at length ten of its auteurs, and discusses the noteworthy films of many others associated with the genre.
The directors discussed in detail are Dario Argento, Lamberto Bava, Mario Bava, Ruggero Deodato, Lucio Fulci, Umberto Lenzi, Antonio Margheriti, Aristide Massaccesi, Bruno Mattei, and Michele Soavi. Each chapter includes a biography, a detailed career account, discussion of influences both literary and cinematic, commentary on the films, with plots and production details, and an exhaustive filmography.
A second section contains short discussions and selected filmographies of other important horror directors. The work concludes with a chapter on the future of Italian horror and an appendix of important horror films by directors other than the 50 profiled. Stills, posters, and behind-the-scenes shots illustrate the book.

Louis Paul has contributed film reviews, interviews, biographies and articles to film-related publications including Chiller Theatre and European Trash Cinema. He published a genre film magazine in the 80s and 90s called Blood Times. Paul co-curated an exhibit at the New York Public Library celebrating 100 years of the horror film called “Screams on Screen.” He lives in New Jersey.

Introduction: The Evolution of the Italian Horror Film      9

Appendix: Important Horror (and Other genre) Films by Other Directors      323 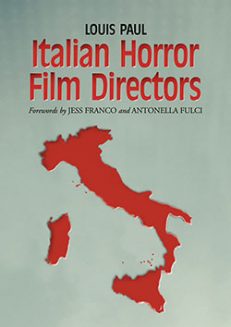