Irish Americans in the Confederate Army

In 1861, Americans flooded to enlist for what all thought would be a short and glorious war. Anxious to prove their loyalty to their new homeland, thousands of Irish immigrants were among those who hurried to join the fight on both sides. While the efforts of the Union’s legendary Irish Brigade are well documented, little has been said regarding the role Irish American soldiers played for the Confederacy. This comprehensive history explores the Irish contribution to the Confederate military effort throughout the four major combat theatres of the Civil War.
Beginning with an overview of Irish Americans in the South, the book looks at the Irish immigrant experience and the character of the typical Irish Confederate soldier, detailing the ways in which Irish communities supported the Southern war effort. The main focus is the military actions in which Irish American soldiers were present in significant or influential numbers. With a combat death rate disproportionate to their numbers, the 40,000 Irish who served in the Confederate army played significant roles in the Army of Northern Virginia, the Army of Tennessee, the hotly disputed coastal areas and the Mississippi and Trans-Mississippi campaigns. Most major battles of the war are discussed including Manassas, Sharpsburg, Gettysburg, Shiloh, Murfreesboro and Appomattox. Appendices contain a list of various Irish commands and field commanders in the Confederate Army.

The late Sean Michael O’Brien was a retired educator and free lance writer. He lived in Eufaula, Alabama.

“wonderful story…an easy read…extensive research…a treasure trove…excellent resource”—Civil War News; “provides a blow-by-blow account of Irish participation in virtually all of the major Confederate battles…useful battle maps”—The Journal of Southern History; “an important addition to this long-neglected subject, and should be read by anyone interested in Irish or Irish-American history”—Blue & Gray Magazine; “explores the often-overlooked contribution of Irish Americans to the Confederate military effort”—Reference & Research Book News. 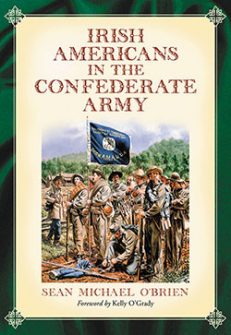 You're viewing: Irish Americans in the Confederate Army $29.95
Add to cart