Created around the world and available only on the Web, internet “television” series are independently produced, mostly low budget shows that often feature talented but unknown performers. Typically financed through crowd-funding, they are filmed with borrowed equipment and volunteer casts and crews, and viewers find them through word of mouth or by chance.
The third of five volumes on Internet TV series, this book covers 335 alphabetically arranged gay and lesbian programs, 1996–2014, giving casts, credits, story lines, episode descriptions, websites, dates and commentary. A complete index lists program titles and headings for gay, lesbian, bi-sexual, transgender and drag queen shows.

Vincent Terrace has worked as a researcher for ABC television and is the television historian for BPOLIN Productions (an independent film and television producing company for which he has created two projected televisions series: April’s Dream and April and May: Ghost Hunters (both starring actress-ventriloquist April Brucker). He has also written more than 50 books, about television and radio.

“Terrace is arguably the most prolific developer of television reference material, with more than 30 books to his credit…recommended”—ARBA; “does not disappoint…the wealth of knowledge learned from the Internet Lesbian and Gay Television Series, 1996–2014 is a fine contribution to the LGBT media landscape”—Journal of Popular Film & Television. 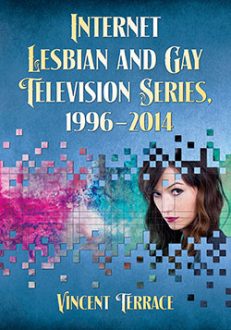