A Newspaper Artist’s Look at Blacks in Sports

George L. Lee was an extraordinarily talented and sensitive artist whose career began in the 1930s in the newspaper business in Chicago. He was there when Joe Louis captured the heavyweight title. He drew the black athletes who broke into major league baseball.
This collection has seven sections of ink sketches and cameo biographies: Boxers—American and World; The Story of Joe Louis; Boxing Events of the ’50s; Baseball Players; Football Players; Basketball Players; and Runners, Jockeys, Golfers and Other Sports Figures. It repeats nothing from the highly successful Interesting People (McFarland, 1989, paperback 2012; “Fascinating…recommended”—Library Journal).

The late George L. Lee was the author of several books. His works of art as well as his other published works, were originally run in a variety of newspapers.

“newspaper cartoons from the past four decades. Many from the Defender and Chicago Tribune. Data is provided on many figures (all indexed)…. An interesting document of a historical aspect of journalism”—ARBA; “brings back not only sports memories, but the memory of an era in Chicago newspaper art”—Reference & Research Book News. 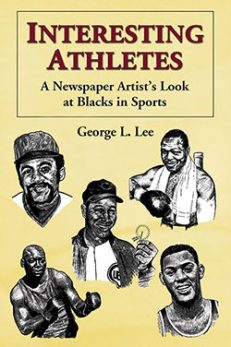