Baseball and Race in Baltimore

The struggle to integrate the Baltimore Orioles mirrored the fight for civil rights in Baltimore. The Orioles debuted in 1954, the same year the Supreme Court struck down public school segregation. As Baltimore experienced demonstrations, white flight and a 1968 riot, team integration came slowly. Black players—mostly outfielders—made cameo appearances as black fans stayed away in droves. The breakthrough came in 1966, with the arrival of a more enlightened owner, and African American superstar Frank Robinson. As more black players filled the roster, the Orioles dominated the American League from 1969 through much of the 1970s and into the early 1980s.
Attempts to integrate the team’s executive suite were less successful. While black players generally did not participate in civil rights actions, several under Robinson’s leadership pushed for front office jobs for former black players. Drawing on primary sources and interviews with former executives, players and sportswriters, this book tells the story of the integration of the Orioles. The author describes how tensions between community leaders and team officials aborted negotiations to both increase black attendance and put an African American in the club’s executive ranks.

Bob Luke is the author of six books about baseball and race in America. He lives in Garrett Park, Maryland. 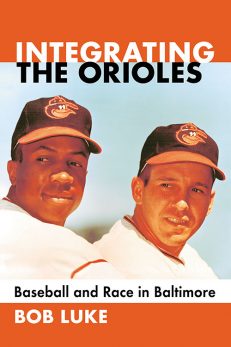 You're viewing: Integrating the Orioles $29.95
Add to cart