In 2003, Major William Edwards and Lt. Col. Robert P. Walters of the 165th Military Intelligence Battalion were given the near-impossible task of improving the U.S. Army’s security posture at Abu Ghraib prison under unfathomable conditions. With input from officers who served with them, their candid firsthand accounts of life at the notorious prison reveal unpublished details of the human devastation that took place there, along with unexpected glimpses of humanity.

William Edwards is a retired U.S. Army colonel and veteran of the Iraq War. He works for Thornton Tomasetti and is a leading industry expert regarding security design and implementation. He lives in Colorado Springs, Colorado.

Robert P. Walters, Jr. is a retired major general who served 38 years in the U.S. Army, 12 years with Special Operations Forces and five years in combat including Operations Desert Shield/Storm, Operation Iraqi Freedom, Operation Enduring Freedom, and Operation Freedom Sentinel the counterterrorist effort in Afghanistan. He is a Senior Mentor for the Army’s Mission Command Training Program and lives in Kansas.

Paul Zanon has had eight books published, almost all of them reaching the bestselling spot in their respective categories on Amazon. He lives in London, UK, and writes for a number of publications.

• “Abu Ghraib was a name seared into the American public’s consciousness when revelations of detainee abuse and torture hit the news in April 2004. Here, two men reflect on their time at the large base, where they never witnessed detainee abuse…. Their earnest duties are conveyed with a straightforward bearing, though never sugarcoated. The authors offer another view of a now infamous location. A truly fascinating account.”—Booklist

• “Leaders inspire and influence by providing purpose, direction, and motivation. LTC Walters’ and MAJ Edwards’ leadership is exactly what the battalion needed in combat in Abu Ghraib. LTC Walters adherence to standards and calm under intense pressure and MAJ Edwards’ guidance built on mutual trust and confidence which was more the empathy of a big brother than a boss. The combat leadership they demonstrated is timeless.”—Captain Romeo Qureishi

• “The families that shouldered the first wave of Operation Iraqi Freedom ‘without a net’ will resonate with this narrative. Low on communication and high on faith, the families that carried one another’s burdens deserve the raw prose on these pages. This is a rare view into the parallel suffering endured during deployments. Unlike glamourized homecoming videos, Inside Abu Ghraib explores the visceral ache of navigating life on the home front while their soldiers navigated the unknown downrange. The personal wars these families fought while standing in the gap for our country deserve to be acknowledged.”—Kathy Palmer, Army spouse

• “Before reading Inside Abu Ghraib, my only view of Abu Ghraib was one of a failure of American values. Now I also see the deployment of the 165th Military Intelligence Battalion at Abu Ghraib as a testament to those values. When Major Edwards and Lieutenant Colonel Walters were given the orders to ‘just fix it,’ with nothing more than their training and values as their guide, their remarkable efforts represented the best of America. At a moment when our nation struggles to unite around a common vision, this story of duty and sacrifice by these remarkable individuals and their families in order to protect and preserve American ideals is an important read, and one we can all celebrate.”—Tom Scarangello, executive chairman, Thornton Tomasetti

• “While there are many books available about war and its impacts on our fighting men and women, Inside Abu Ghraib takes a deep dive into the effects these armed conflicts have on the families back home, how they cope, and ultimately how they are changed by this experience. The experiences of Colonel Edward’s entire family unit are so eloquently woven into this narrative and have clearly helped him transition seamlessly into the civilian world. This is an opportunity to immerse yourselves in the events that drove Colonel Edwards’ inner desire for continuous learning, self-evaluation, and ultimately self-improvement. While his big four leadership traits of passion, commitment, integrity, and empathy were all developed and then honed in a military setting, they have transitioned perfectly into the civilian world. Simply through his actions and pure force of will, he makes everyone around him better as individuals and as a team; which in its simplest form is the real meaning of leadership.”—Peter DiMaggio, co-CEO, Thornton Tomasetti

• “Great story, well-thought-out, and well written. I’m glad you included the voices of the children, their emotions, and their growth. First time for me that I’ve read about the military’s family and about what they go through in wartime. Others need to hear their voices.”—Frank Barone, Major Edward’s High School 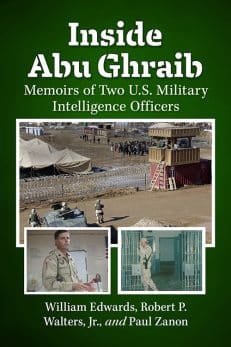