Infield Fly Rule Is in Effect

The History and Strategy of Baseball’s Most (In)Famous Rule

The Infield Fly Rule is the most misunderstood rule in baseball and perhaps in all of sports. That also makes it the most infamous. Drawing on interviews with experts, legal arguments and a study of every infield-fly play in eight Major League seasons, this book tells the complete story of the Rule.
This author covers the Rule’s history from the 19th century to the modern game, its underlying logic and supporting arguments, recent criticisms and calls for repeal, the controversies and confusion it creates, and its effect on how the game is played.

Howard M. Wasserman is a professor of law at Florida International University College of Law. He writes about sports rules, the role of free expression in sports for fans and athletes, and federal civil rights litigation. He lives in Miami, Florida.

• “Every conceivable argument for and against IFR….are addressed here precisely, with wit, style, and evidence. One can ask for no more than that. …highly recommended”–Choice

• “In this thoroughly researched and rigorously reasoned ode to the infield fly rule, Howard Wasserman demonstrates in clear and inviting prose that careful attention to this one seemingly oddball rule can illuminate deep truths about baseball, about people, about sport, and perhaps even about law. A fascinating read.”—Mitchell Berman, University of Pennsylvania Law School

• “Professor Wasserman combines a true investigator’s curiosity with a master storyteller’s talent to take the reader on a journey deep into the history, application, and practicality of one of sport’s most controversial and misunderstood rules…the infield fly rule. Fans and participants will find it an intriguing read as it adds a new dimension to watching a baseball game.”—Jim Evans, retired major league umpire, international umpire trainer

• “In a world where the rule of law sometimes appears to be dissolving, at least we can still count on the infield fly rule. Howard Wasserman dives into one of the more baffling regulations in all of sport with rigor and aplomb. Don’t argue with him or he’ll eject you.—Seth Stevenson, Slate contributor and author of Grounded: A Down to Earth Journey Around the World

• “Wasserman hits for the cycle with any fan of the game who cares about the history, rules, policy and fairness of our national past time. He brings insights from law, other sports, and a deep knowledge of the game to better understand the infield fly rule and how it can be improved”—Spencer Weber Walker, Loyola University Chicago School of Law, co-editor of Baseball and the American Legal Mind

• “A thoughtful and deliberate analysis of a rule that is regarded as ‘arcane’ by casual observers but whose nuance and significance are appreciated by students of the game.”—Mark Cochran, professor of law, St. Mary’s University 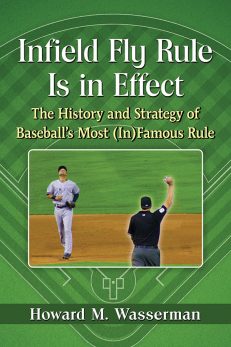 You're viewing: Infield Fly Rule Is in Effect $29.95
Add to cart