Indian from the Inside

Native American philosophy has enabled aboriginal cultures to survive centuries of attempted assimilation. The first edition of this historical and philosophical work was written as a text for the first course in Native philosophy ever offered by a philosophy department at a Canadian university. This revised edition, based on more than twenty-five years of research through the Native Philosophy Project and funded in part by the Rockefeller Foundation, is expanded to include extensive discussion of Native American philosophy and culture in the United States as well as Canada. Topics covered include colonialism, the phenomenology of the vision quest, the continuity of Native values, land and the integrity of person, the role of cognitive science in supporting Native narrative traditions, language in Indian life, landscape and other-than-human persons, the teaching of Native American philosophy and the value of various research methods.

Dennis H. McPherson is an executive member of the Centre for Health Care Ethics at Lakehead University in Thunder Bay, Ontario, Canada. He is an Ojibwa and a band member of the Couchiching First Nation at Fort Frances, Ontario and the founding chair of the LU Department of Indigenous Learning. 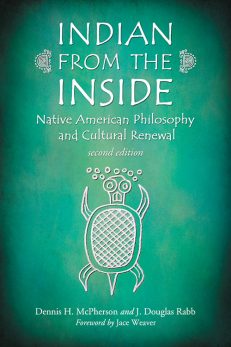 You're viewing: Indian from the Inside $29.95
Add to cart