Imperial China and the State Cult of Confucius

Initiated during the Former Han Dynasty in 136 BCE, the state cult of Confucius endured for more than 2000 years as the civil religion of a vast empire that ever-renewed itself despite periodic disunity and barbarian conquests. This was a weak agrarian state whose foundation was a Neolithic peasantry, whose archaic state-idea traces to the dawn of Chinese civilization, and whose ruling elite earned its credentials in civil service examinations based on classic Confucianism dating to pre-imperial times—all centered on the political thinking of a late Bronze Age philosopher.
This work explores the political logic of old China’s archaic civilization, where court protocol was the very essence of a liturgical government whose philosophical basis rested on the scriptural authority of Confucian teachings. Here is the historical paradox (vast empire, weak state) resolved in this book. By looking into the state cult of Confucius and its origins, the illogical begins to look reasonable for the pre-modern conditions of antiquity. Included are 128 photographs along with an appendix covering the Great Chinese Museum of New York and a bibliographic essay offering essential information on important works of Sinology.

The late Leon Stover, professor emeritus at the Illinois Institute of Technology, was the first to bring science fiction to the college curriculum and was the author of numerous landmarks of intellectual history. He lived in Chicago. 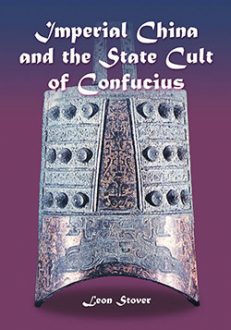 You're viewing: Imperial China and the State Cult of Confucius $55.00
Add to cart