I Was a Teenager in the American Revolution

Teenagers were critical to the American victory in the Revolutionary War. Over half of the colonial population was under the age of 16. A draft of all boys between the ages of 16 and 19 was enacted to fill the ranks of the Continental Army, leaving their sisters to fill their places at home. These circumstances meant that teenagers played an essential role not only in combat but also on the home front.
Israel Trask joined the militia at the age of 10; by the time he turned 12 he was serving at sea. Abigail Foote, a 15-year-old from Connecticut, wove cloth, sewed clothes, weeded the garden and made cheese, providing much needed clothing and food. Henry Yeager, 13, barely escaped hanging for his army role as drummer. Dicey Langston, 16 when the war began, risked her life to pass loyalist information to the Patriots. Future president Andrew Jackson was only 14 when he was captured and sent to jail at Camden.
This book relates the Revolutionary War experiences of 23 teenagers. Drawing on firsthand accounts of young Americans from Massachusetts to South Carolina and from many different backgrounds—wealthy and poor, slave and free, Tory and Patriot—it provides a fascinating, varied look at America’s fight for independence and teenagers’ role in this struggle for liberty. Excerpts from journals and memoirs make up the body of the text. Appendices provide a chronology of events and a glossary of sailing terms. 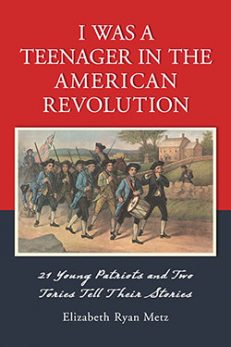 You're viewing: I Was a Teenager in the American Revolution $29.95
Add to cart