Clown Prince of the Mound

A strong-armed devastating spitball pitcher from rural Tennessee who once won 16 games with the Boston Braves, Hub Perdue is better remembered today as one of the clown princes of the Deadball Era. Often compared with fellow player-comedians Germany Schaefer, Nick Altrock, and Rabbit Maranville, Perdue had a quick wit and a rebellious streak that amused teammates but sometimes led to conflicts with management and umpires. (“Mix ’em up!” manager George Stallings had told him, encouraging the weak-hitting pitcher to take his at-bats more seriously; Perdue, a right-hander, dutifully took his strikeouts from alternating sides of the plate.) His penchant for the subversive—he was also a players’ union representative who freely dispensed advice on contracts and negotiation—might in fact have curtailed what had been a promising big league career. But his antics in the majors and minors became the stuff of legend, known as “Hublore.”

John A. Simpson is a retired high school history teacher and baseball coach. He holds a Ph.D. in American history from the University of Oregon. He lives in Kelso, Washington.

“[c]arefully written and well researched…. This book is a worthy addition to the literature, especially for those with a love affair with the storied Southern Association, or someone just flirting with it”—SABR Deadball Committee Newsletter; “Simpson’s account of Perdue’s life furthers our understanding of baseball’s lesser known but intriguing characters. Simpson vividly captures the bitter-sweet life of a happy-go-lucky, journeyman minor leaguer, who not only battled the obstacles to play professional baseball but also had a penchant for telling tales, wrangling with authority, and believing that life should be about having fun”—Nine; “Simpson’s book should provide some much needed scholarship on Deadball players from the South”—Northwest Chapter of SABR. 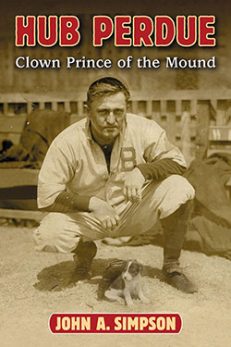