How to Misunderstand Tolkien

The Critics and the Fantasy Master

J.R.R. Tolkien is an author beloved by many, but people forget the hostile reception of his work from several literary critics, who despised (and some who continue to despise) him and his readers. Other intellectuals and critics have a more positive opinion of his work, but some read aspects of his books or his beliefs to fit their own agendas. Over the decades, scholars have claimed that Tolkien represents a myriad of (sometimes contradictory) political positions. Whether these scholars act out of disdain for Tolkien or from a simple misread of his works, the outcome is a muddled distortion of who Tolkien really was. This book peels back the discourse in an attempt to reveal the true nature of an author who so often defies categorization. Using all possible nuance, chapters explore the villains of Lord of the Rings, its female heroines and its moral compass, as well as its definitions of heroism and failure. This book hopes to provide a uniquely accurate and objective assessment of one of the most misunderstood writers of our time.

Bruno Bacelli is a fantasy literature enthusiast with a long experience as a columnist in the online magazine Fantasy Magazine, from 2007 to 2016. He has written several novels and short stories. He lives in Milan, Italy. 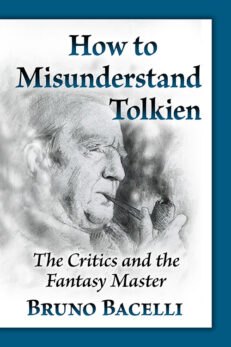 You're viewing: How to Misunderstand Tolkien $29.95
Add to cart