How to Make Movies

The success of low-budget independent films like The Blair Witch Project and Paranormal Activity have clearly demonstrated that successful movies can be made with very small budgets. Still, working on a tight budget requires both skill and ingenuity, and is an inevitable and continuous learning experience for the filmmaker.
Join two dozen truly independent filmmakers—those used to working, and delivering, within extreme limitations—as they bluntly chronicle their experiences creating features “from the trenches.” They cover the major stages of the filmmaking process, from financing, technical decisions, and handling actors and crew to music, production, and distribution. With loads of practical advice, actual case studies, and many behind-the-scenes photographs, this collection of war stories from the micro-budget front lines will benefit aspiring and experienced independent filmmakers alike.

Kevin J. Lindenmuth has worked in the film/television business for about 30 years, in New York and Detroit. He has written and produced a dozen features, with worldwide distribution, and seven documentaries, most of them for PBS. He is the author of three previous books on independent filmmaking.

Locations: Where You Live and Where You Shoot  112

Being an Independent Filmmaker  197

Working on Other People’s Independent Films  212

Your Career as an Indie Filmmaker  230

Appendix: The Filmmakers and Their Films  249 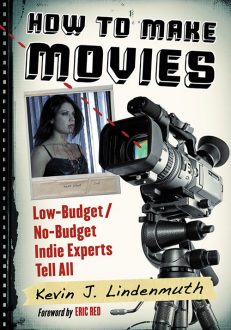