In the Words of Vietnamese Strategists and Operatives

When Saigon fell to North Vietnamese forces on April 30, 1975, the communist victory sent shockwaves around the world. Using ingenious strategy and tactics, Hồ Chí Minh had shown it was possible for a tiny nation to defeat a mighty Western power. The same tactics have been studied and replicated by revolutionary forces and terrorist organizations across the globe. Drawing on recently declassified documents and rare interviews with Hồ Chí Minh’s strategists and operatives, this book offers fresh perspective on his blueprint and the reasons behind both the French (1945–1954) and the American (1959–1975) failures in Vietnam, concluding with an analysis of the threat this model poses today.

A former engineering consultant, Virginia Morris is now a security and defense analyst. She lives in London.

Photographer and map designer Clive A. Hills served in the British Parachute Regiment before he began working as a construction manager. He lives in London.

Virginia Morris with Clive A. Hills 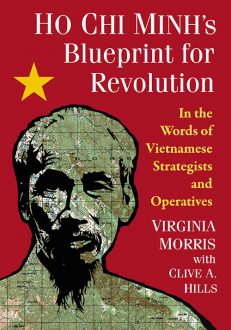