This reference work covers both Herman Melville’s life and writings. It includes a biography and detailed information on his works, on the important themes contained therein, and on the significant people and places in his life. The appendices include suggestions for further reading of both literary and cultural criticism, an essay on Melville’s lasting cultural influence, and information on both the fictional ships in his works and the real-life ones on which he sailed.

Corey Evan Thompson has taught at the University of Windsor, St. Clair College, and Canadore College. His scholarly articles can be found in journals including Papers on Language and Literature and American Transcendental Quarterly. He lives in Cornwall, Ontario.

Laurence W. Mazzeno, president emeritus of Alvernia University, Reading, Pennsylvania, is the author or editor of 20+ books and more than 300 articles and reviews on literature and history. He lives in Arvada, Colorado. 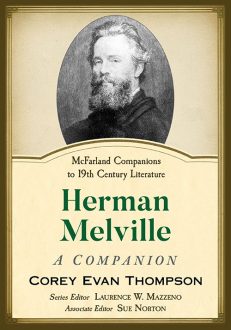