Henry James Against the Aesthetic Movement

Essays on the Middle and Late Fiction

Writer Henry James (1843–1916) was born in America but preferred to live in Europe; he finally become a British subject near the end of his life. His status as a permanent outsider is responsible for the recurring themes in his writing dealing with European sophistication (decadence) compared to American lack of sophistication (or innocence). He is respected in modern times for his psychological insight, for being able to reveal his characters’ deepest motivations.
These 11 essays, along with an introduction and an afterword, examine James’s work through the prism of the author’s latest style. Topics the contributing authors address include the Henry James revival of the 1930s, three of James’s male aesthetics, women in his works, literary forgery, and parallels with the career and views of Margaret Oliphant. Three essays delve into issues of representation in art and fiction, then three more explore decadence, identity and homosexuality.

David Garrett Izzo is an emeritus professor of English who has published 16 books and 60 essays of literary scholarship, as well as three novels and two plays. He lives in Fuquay Varina, North Carolina.
Daniel T. O’Hara is the first Mellon Term Professor of Humanities in the College of Liberal Arts and professor of English at Temple University in Philadelphia, Pennsylvania. He is the author of five books and the editor or co-editor of four others.

I. Critical Contexts
The Henry James Revival of the 1930s
DAVID GARRETT IZZO      13

IV. Issues of Representation: Art and Fiction
The Face of Decadence in The Sacred Fount
SHEILA TEAHAN      109
Figuring the Princess: The Princess Casamassima and Pater’s Mona Lisa
ANDREA CABUS-COLDWELL      123
On Not Representing Milly Theale: Sacrificing for Art in The Wings of the Dove
MARK CONROY      134
“The Figure in the Carpet” as an Allegory of Reading
VITTORIA INTONTI      157 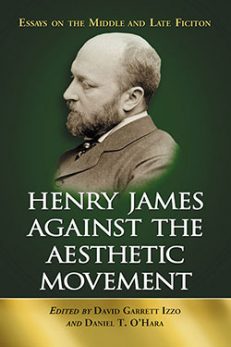 You're viewing: Henry James Against the Aesthetic Movement $39.95
Add to cart