Once the beehive coke oven was perfected in Fayette County, Pennsylvania, the coal and coke industry began to flourish and supply other fledgling industries with the fuel they needed to succeed. The thrust of this growth came from Henry Clay Frick, who opened his first coal mines in the Morgan Valley of Fayette County in 1871. There, he helped lead the industry, making it the major developmental force in industrial America. This book traces the birth and growth of the early coal and coke industry from 1870 to 1920, primarily in Fayette and Westmoreland Counties. Beyond Frick’s importance to the industry, other major topics covered in this history include the lives and struggles of the miners and immigrants who worked in the industry, the growth of unions and the many strikes in the region, and the attempts to clean the surrounding waterways from the horrific pollution that resulted from industrial development. Perhaps the most significant fact is that this book uses primary sources contemporary with the golden age of the coal and coke industry. That effort offers an alternative view and helps repair the common portrayal of Frick as corrupt by showing his work as that of an industrial genius.

The late Cassandra Vivian, a writer, photographer, historian, and world traveler, was the author of several books, including a definitive guide to the vast western desert of Egypt. She earned awards from the Pennsylvania Council on the Arts and Pennsylvania Humanities and the Arts. 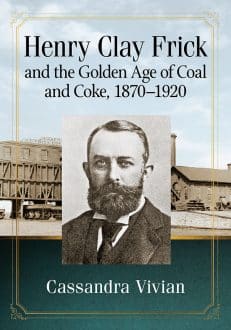