A History and Analysis of 130 Engagements

The Hellenistic Period (323–31 BCE) saw the Grecian phalanx—long dominant in Mediterranean warfare—challenged by legionary formations from the rising city-state of Rome. The Roman way of war would come to eclipse phalanx-based combat by the 160s yet this was not evident at the time. Rome suffered numerous defeats against the phalanxes of Pyrrhus and Hannibal, its overseas campaign against the brilliant Spartan mercenary Xanthippus met disaster, and several Roman victories over Hellenistic foes were not decisive. The story of combat in this pivotal era is not well documented. This book for the first time provides detailed tactical analyses for all 130 significant land engagements of Hellenistic armies 300–167 BCE.

Fred Eugene Ray, Jr., is the author of both books and articles on the subject of ancient Greek warfare. A retired geologist and oil industry executive, he lives in Bakersfield, California.

“Hellenistic Land Battles is a workhorse of a book. It does double duty, serving as an easily thumbable reference for the period’s major land battles (though not all of them—the book omits some critical fights from the first 23 years of the period) and a primer on troop classes, kit, and combat roles. Even better, it advances some truly new and refreshing theories on how people organized to fight in this undeserved period… Ray is to be commended… A fresh and fascinating take on battle that fills a gap… A worthy contribution to the field for scholars and amateurs alike.”—Ancient Warfare 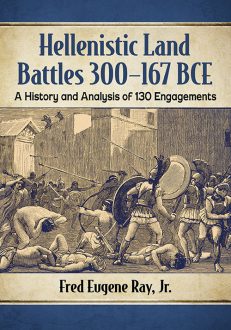