Athletes and Entertainers and the Ethics of Speaking Out

After Natalie Maines of The Dixie Chicks expressed her opposition to the Iraq War and President Bush in a country music concert, she was told to “shut up and sing.” When NFL player Colin Kaepernick protested police brutality by kneeling during the national anthem, he was applauded by some and demonized by others. Both had their careers irrevocably altered by speaking out for their beliefs. This book examines the ethical issues that arise when famous people speak out on issues often unrelated to the performances that brought those figures to public attention. It analyzes several celebrity speakers—singers Taylor Swift and the Chicks; satirist Jon Stewart; actor Tom Hanks; and athletes Serena Williams, Stephen Curry, Colin Kaepernick, and Naomi Osaka—and demonstrates that justifiable speaking requires celebrity speakers, journalists, and audiences to consider ethical issues regarding platform, intent, and harm. Celebrity speakers must exercise ethical care in a digital world where audiences equate celebrity status with authority and expertise about public issues. Finally, this book considers how people who are not famous can understand their ethical responsibilities for speaking out about public issues in their own spheres of influence.

Kristie Bunton is the dean of the Bob Schieffer College of Communication at Texas Christian University in Fort Worth, Texas.

Preface 1
Introduction: Who Gets to Say What? Identifying Questions About Speaking Out by Celebrity Athletes and Entertainers 5

Part I—Ethical Territory to Consider
1. What’s the Cultural Landscape for Speaking Out? Connecting Celebrity Speakers and Public Issues 16
2. What Counts as Speaking Out? Defining the Ethical Construct 33
3. What Ethical Issues Surround Speaking Out? Exploring Power, Privilege, Harm and Justification 48

Conclusion: How Do We Speak Out Ethically When We’re Not Famous? 188
Chapter Notes 197
Works Cited by Chapter 231
Index 261

• “Celebrities approaches to ‘speaking out’ are examined in systematic discussions that are vigorous, challenging, and thought-provoking…plenty to ponder here”—Booklist 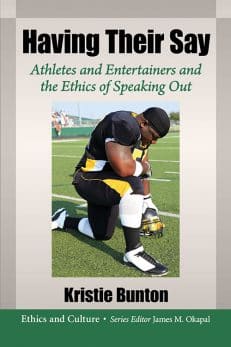