Hal Trosky played first base (and was team captain) for the Cleveland Indians during the Great Depression. His career stretched from the heyday of Babe Ruth through the end of World War II. It was a time when the American League had perhaps the three greatest ever first basemen—Lou Gehrig, Jimmie Foxx and Hank Greenberg—whose feats consigned Trosky to the footnotes of history. Yet at his peak he played comparably to other pros, leading the American League in RBIs in 1936.
Trosky left baseball at 34, his career cut short by migraine headaches, and was elected to the Indians’ All-Time team in 1969. Drawing on family archives and exhaustive research, this first ever biography covers his early years in Iowa, his Major League career and his post-baseball life.

SABR member William H. Johnson is a retired naval flight officer. He has coauthored a book, and written an array of newspaper and magazine articles, on the story of baseball in eastern Iowa. He lives in Beavercreek. Ohio.

“exceptionally informative…recommended”—Midwest Book Review; “Johnson brings to readers the successes and setbacks of a potential Hall of Famer, first baseman Hal Trosky, who excelled for the Cleveland Indians during the Great Depression, when he was compared with the likes of Lou Gehrig, Jimmy Foxx, and Hank Greenberg. Johnson carefully portrays Trosky’s baseball career, including the down periods when the slugger suffered from migraine headaches and when he led the Tribe through the 1940 ‘Cry Baby Rebellion’ against manager Oscar Vitt. Readers will enjoy this most interesting period in the Tribe’s history and Trosky’s role as the team’s captain.”—James E. Odenkirk, Tribes and Tribulations: The Early Decades of the Cleveland Indians. 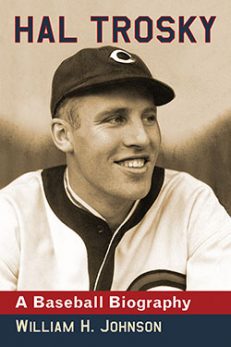