The 1960 Pittsburgh Pirates were a special team—team being the operative word. There were no superstars, although Roberto Clemente would become one, and nobody had a record season. The Battling Bucs frequently came from behind to win late in the game, with Pirates broadcaster Bob Prince signing off, “We had ’em all the way.” Pittsburgh was the Sad Sack of baseball through most of the 1950s, and as the Pirates grabbed the National League lead early in the 1960 season, fans wondered if the guys in vest-shirts and black sleeves could indeed hang on.
And then there was the World Series, the one everybody but the Pirates thought would be won by the Yankees, in which Bill Mazeroski provided the most dramatic finish of all sports championships. This book, featuring interviews with Clemente, Dick Groat, Bob Friend and Dick Schofield, chronicles the Pirates of 1960—a team of friends—and their push through a long and magical season.

Freelance sportswriter Thad Mumau wrote for the Fayetteville Observer for more than 35 years and for the Atlantic Coast Conference Sports Journal for 22. He lives in Fayetteville, North Carolina.

Seven. Invasion of the Giants  58

Eight. Heart of the Pirates  69

Twelve. The Road Through Milwaukee  112

Nineteen. How It All Happened  201

“A compelling case about an important team in baseball history…will capture the interest of baseball fans”—U.S. Sport History. 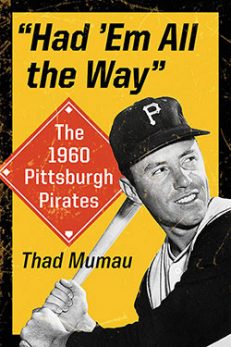