Governor James Rolph and the Great Depression in California

In 1911, when businessman James Rolph first ran for mayor of San Francisco, he promised, “I will be mayor of the whole city, and not the mayor for any particular section.” This statement seemed to characterize Rolph’s political career. After serving an unprecedented five terms as mayor, he went on to win California’s 1930 gubernatorial election. Rolph, however, had severely underestimated the challenges he would be up against as a Depression-era governor. A genuine love of people and desire to help had gotten him as far as the governor’s office but could do little to help him solve the new problems he found. Lack of a firm agenda coupled with an unrealistic (or perhaps idealistic) governing style left him at odds with the legislature and found his chief lieutenants forming into warring cliques. Ultimately, Rolph—in spite of good intentions and a love of civil service—was unable to translate his mayoral triumph, with all its charm and style, into a gubernatorial success.
This biography relies heavily on primary sources such as contemporary newspaper articles and firsthand recollections. Beginning with Rolph’s mayoral career, the book enumerates the qualities which led to his phenomenal success as San Francisco’s top politician. The work then examines the criticisms levied against Rolph as governor and the ways in which these complaints were, and were not, justified. The unfortunate historical timing of Rolph’s governorship is also discussed. In many ways, Rolph’s attempt to translate from prosperous ’20s mayor to Depression-era ’30s governor was simply ill-fated from the very beginning. A detailed bibliography and index is also provided.

James Worthen writes about the impact of personality on political behavior. A former program manager at the Central Intelligence Agency in Washington, he currently lives in Pismo Beach, California.

PART ONE: The Citizen Politician

PART THREE: Moving On to Sacramento 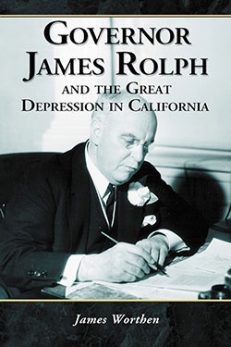 You're viewing: Governor James Rolph and the Great Depression in California $39.95
Add to cart