Governor Alexander Martin of North Carolina was one of the most important figures in the colonial and early state history of North Carolina. A 1756 graduate of Princeton, he was the first president of the Board of Trustees of the University of North Carolina. He served longer as governor of the state than any other person until the election of Luther Hodges in the 20th century. He was conferred an honorary doctorate by Princeton and elected to membership in the American Philosophical Society while he was a U.S. senator. While in the Senate, he fought successfully to open the Senate to the public. He was one of five North Carolina delegates to the Constitutional Convention in Philadelphia. He was a friend and protector of the Moravians and other non-conformists. He was the most powerful and effective leader from the frontier region of North Carolina for a quarter of a century.

The first chapters of this biography discuss Martin’s parents and their high regard for education, his time at Princeton, and his arrival in North Carolina in 1760. The next chapters explore Martin’s and Rev. David Caldwell’s effort to prevent bloodshed during Governor Tryon’s confrontation with the Regulators that led up to the Battle of Alamance, Martin’s experiences in the war as second in command of the North Carolina Regiment, his election as senator from Guilford County to the General Assembly in 1777, and his much-celebrated election as governor in 1781. The final three chapters of the book include information about his years in the U.S. Senate, his retirement at his home “Danbury” in Rockingham, North Carolina, his relationship with his family and his very detailed last will and testament. His home, “Danbury,” later gave its name to Danbury, North Carolina, in Stokes County, which his nephews helped found about 1848, long after his death.

Charles D. Rodenbough has written articles for such publications as Russian Life, Middle Tennessee Journal of Genealogy & History, Religion in Eastern Europe and Rockingham County Journal of History and Genealogy. He lives in Greensboro, North Carolina. 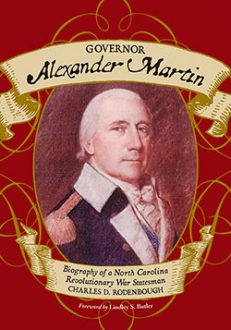