In the aftermath of the American Revolution, the production of Gothic plays brought into sharp focus the social turmoil of the critical period between 1794 and 1830. These plays, considered the earliest form of melodrama, enhanced the repertories of the first permanent theatres in the United States.
This first full-length study of early American Gothic drama examines the relationship between Gothic plays and the developing society in which they flourished. Beginning with an introduction to the rise of Gothic fiction and drama, it discusses topics ranging from the novelty of American artistic talent and critical opinions of Gothic melodramas to the representation of women in the dramas as compared with the reality of the contemporary female plight. The history of the plays presented here reflects the conflicts surrounding American artistic endeavors and the artists who made American drama distinct from all others.

M. Susan Anthony is an associate professor of Communication and Theatre at Depauw University in Greencastle, Indiana.

4. The “Illustrious Spirit” Meets the “Sanguinary Monster”: Characterization of Males in Gothic Plays      47

9. “A Plain Unvarnish’d Tale”: Adaptations of British Plays for the American Stage      127 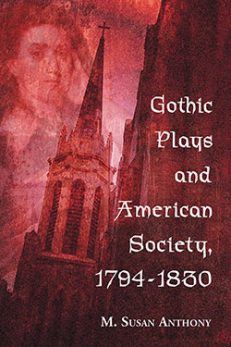