Essays on the Challenges for Small States

Despite the controversial nature of globalization, there is no doubt that the pace and intensity of global interactions has been multiplied exponentially over the last few decades. Criticism of globalization is generally arranged into three camps: political, economic and cultural. Political critics point to the status of the small state and conclude either that it is in retreat, or that the state has reconstituted itself to confront the challenges posed by globalization, thereby transforming itself into a “competition state.” Economic critics hold that globalization is nothing new, that international transactions are in the logic of capitalism and that the trade along the silk route goes back centuries. Cultural critics protest that globalization is taking us headlong into the “homogenization of the world.” Others warn of new fault lines that would lead to “a clash of civilizations” and international conflicts along those lines. Others lament that cultural globalization will end with the Americanization of the world.
This collection of essays, like the debates themselves, is divided into three parts. The first section focuses on the political aspects of globalization. In one essay, “Globalization and the Caribbean,” the essayist argues that internationalization leaves no room for small countries in the Caribbean. The essays in the second section are devoted to an economic inquiry into the process and impact of globalization. In “Inequality and the Division of Gains at the Global Level,” one essayist notes that the logic of economic theory is being overwhelmed by the interests of the powerful, and that the concerns of the poor countries are important only to the point where they begin to impact the well-being of the rich. The final section explores the issue of cultural and social integration.
Instructors considering this book for use in a course may request an examination copy here.

Ann Marie Bissessar is a social sciences lecturer at the University of the West Indies. She lives in St. Augustine, Trinidad and Tobago, West Indies.

Part One: Globalization and Governance

Globalization and the Caribbean      7

The Cotonou Agreement and the ACP-EU Partnership: Towards a Reevaluation of Politics?      16

Globalization, Diversity and Civil Society in the Caribbean: Integration by Design or Default?      56

Globalization, Governance and Integration: The Case of Health Care Service as a Predictor of Social Stability      105

Part Two: The Economics of Globalization

Inequality and the Division of Gains at the Global Level: Some Reflections      137

Open Regionalism: The FTAA and Implications for CARICOM Development      173

Cultural Policy, Globalization and the Governance of Plural Societies      197

Caudillismo: A Framework of Resistance      212 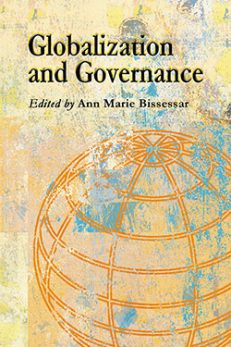 You're viewing: Globalization and Governance $35.00
Add to cart