An Illustrated Guide to Cars, Trucks, Half-Tracks, Motorcycles, Amphibious Vehicles and Others

This volume presents a cross-section of the most common transport vehicles produced and used by the German army. Tanks plus auxiliary vehicles such as cars, motorcycles, vans, ambulances, trucks and tractors made it possible for the troops to keep moving. These lightly armored or unarmored vehicles—aka “soft skins”—operated behind the front lines, maintaining supply lines, connecting armies with their home bases, and ultimately determining the outcome of battle.
Beginning with the development of military vehicles in the early 1930s, this volume discusses the ways in which this new technology influenced and, to some extent, facilitated Hitler’s program of rearmament. Nomenclature, standard equipment, camouflage and the combat roles of the various vehicles are thoroughly examined. Individual vehicle types are arranged and discussed by the following classifications: cars and motorcycles; trucks and tractors; half-tracks and wheeled combat vehicles. Accompanied by well-researched, detailed line drawings, each section deals with a number of individual vehicles, describing their design, manufacture and specific use.

Historian, writer and illustrator Jean-Denis G.G. Lepage is the author of numerous books. His interests include World War II and medieval and French history. He lives in Groningen, Netherlands. 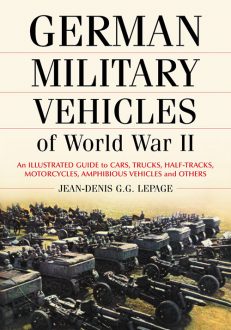