Genocide and Rescue in Wolyn

After the 1939 Soviet and 1941 Nazi invasions, the people of Southeast Poland underwent a third and even more terrible ordeal when they were subjected to mass genocide by the Ukrainian Nationalists. Tens of thousands of Poles were tortured and murdered, not by foreign invaders, but by their fellow citizens—sometimes neighbors, relatives, and former friends. The children who survived them vividly remember these atrocities and now, many decades later, tell their tragic tales. These accounts, never before published in English, describe the brutal murders these children witnessed, their own miraculous survival, and the heroic rescues that saved them.

Tadeusz Piotrowski is a professor of sociology at the University of New Hampshire in Manchester where he also teaches courses in anthropology and the Holocaust, and where he served as the Associate Dean of Faculty. He has received many awards including the Outstanding Associate Professor Award. He lives in Manchester.

“survivors tell of the brutal torture and murder of thousands of Poles…vividly document[s] a terrifying episode in history”—Booklist; “the most complete account…one of the few books telling of this horrific episode published in English. The intensity of the brutality…is both consistent and mindboggling. The excerpts are both poignant and heart-rending”—Against the Grain; “sobering…useful and detailed chronology”—Stone & Stone Second World War Books; “important…meticulous scholarship…pleasingly rounded off with five appendices, 25 tables and 12 maps, all of which provide further detailed information about this truly appaling genocidal episode”—The Journal of Holocaust Education. 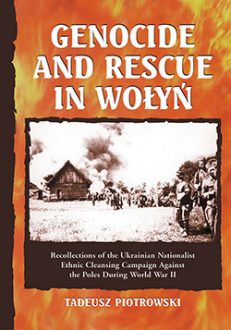 You're viewing: Genocide and Rescue in Wolyn $35.00
Add to cart