This biography of General Edwin Vose Sumner emphasizes his role in developing the mounted arm of the U.S. Army. Born in Boston in 1797 he abandoned a merchant’s career and entered the U.S. Infantry in 1819. Transferring to the Dragoons in the 1830s, Sumner established the Cavalry School of Practice at Carlisle Barracks, Pennsylvania. Among his students was the future Confederate General Richard S. Ewell. Sumner served with distinction throughout the Mexican War and maintained a balance between the warring factions in Kansas in the mid–1850s (his efforts earning him the displeasure of the Pierce administration). He led an expedition against the Cheyennes with subordinates that included future Civil War generals John Sedgwick and Samuel Sturgis as well as the capable but headstrong Lieutenant Jeb Stuart. Replacing Albert Sidney Johnston in California in 1861, Sumner kept the state in the Union. Returning east, he commanded the Second Corps throughout 1862 and died of pneumonia in March 1863.

Thomas K. Tate is the author of two Civil War biographies and numerous articles. He lives in Orefield, Pennsylvania.

“meticulously researched and deftly written…invaluable…very highly recommended”—Midwest Book Review; “this book is one that was greatly needed to fill a void in the field of Civil War history. This book deserves a place on your Civil War bookshelf”—Blue & Gray Magazine. 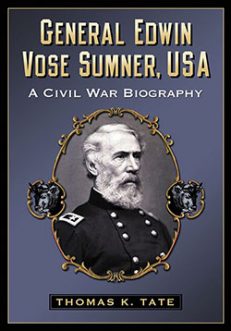