A Passion for Hounds, from the Civil War to Little Bighorn

General George Armstrong Custer and his wife, Libbie Custer, were wholehearted dog lovers. At the time of his death at Little Bighorn, they owned a rollicking pack of 40 hunting dogs, including Scottish Deerhounds, Russian Wolfhounds, Greyhounds and Foxhounds. Told from a dog owner’s perspective, this biography covers their first dogs during the Civil War and in Texas; hunting on the Kansas and Dakota frontiers; entertaining tourist buffalo hunters, including a Russian Archduke, English aristocrats and P. T. Barnum (all of whom presented the general with hounds); Custer’s attack on the Washita village (when he was accused of strangling his own dogs); and the 7th Cavalry’s march to Little Bighorn with an analysis of rumors about a Last Stand dog. The Custers’ pack was re-homed after his death in the first national dog rescue effort. Well illustrated, the book includes an appendix giving depictions of the Custers’ dogs in art, literature and film.

Brian Patrick Duggan is the author of Saluki: The Desert Hound and the English Travelers Who Brought It to the West, and numerous articles on canine history which have been published in AKC Family Dog, AKC Gazette, Greasy Grass: The Journal of the Custer Battlefield Historical & Museum Association and Research Review: The Journal of the Little Big Horn Associates, among others. He is a retired university technology educator, an active American Kennel Club judge, and the editor for McFarland’s Dogs in Our World series.

• “Duggan delivers a well-researched and elegantly written work…Custer’s hounds, instead of being shunted into the footnotes, are front and center, brought vividly to life by a careful historian who is also an authority on sighthound breeds…Duggan’s book is a love story: Man loves woman, woman loves man, and both love dogs…The field of Custer scholarship has been enriched by Duggan’s work, and it is hoped that future biographers of history’s heroes and rogues will learn from its example.”—AKC Gazette

• “This book is chock-full of photos—many of which I have not seen before—sketches, and paintings, but the meat of it is in the research, which to me is remarkable and clearly establishes Brian as one of the best and most definitive writers on the Custers and their lives together with their animals. The book is even better than its content, for Brian is one fine writer. This is a curl-up-with-a-good-drink book, one of those whose only fault is that it ends.”—Frederic C. Wagner III, author of The Strategy of Defeat at the Little Big Horn: A Military and Timing Analysis of the Battle and Participants in the Battle of the Little Big Horn: A Biographical Dictionary of Sioux, Cheyenne and United States Military Personnel, 2d ed.
• “Who knew that a book tracing the fascinating life of George and Libbie Custer through their love for animals could be so enjoyable? Not only is the author an excellent writer, but his research is groundbreaking and his knowledge of the subject unequalled. I loved this book. I loved this book.”—James Donovan, author of A Terrible Glory

• “Brian, I wanted to let you know how much I REALLY enjoyed your book on Custer and his dogs! It was worth every penny of full price.”—Paul Andrew Hutton, Western historian and author of The Apache Wars 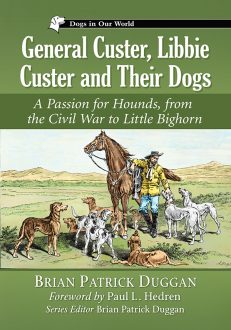 You're viewing: General Custer, Libbie Custer and Their Dogs $45.00
Add to cart