The horror anthology TV show American Horror Story first aired on FX Horror in 2011 and has thus far spanned eight seasons. Addressing many areas of cultural concern, the show has tapped in to conversations about celebrity culture, family dynamics, and more. This volume with nine new essays and one reprinted one considers how this series engages with representations of gender, sexuality, queer identities and other LGBTQ issues. The contributors address myriad elements of American Horror Story, from the relationship between gender and nature to contemporary masculinities, offering a sustained analysis of a show that has proven to be central to contemporary genre television.

Harriet E.H. Earle is a lecturer in English at Sheffield Hallam University in Sheffield, South Yorkshire, England. Her work has appeared in The Journal of Popular Culture and The European Journal of American Culture.

Review Fix chats with Gender, Sexuality and Queerness in American Horror Story editor Harriet E. H. Earle, who discusses the essay collection and why it’s a special one for her.

Review Fix: How did this project start for you?

Harriet E.H. Earle: I wrote an article for the Journal of Popular Culture in 2014, which looked at the asylum as a common site for horror, with special reference to season two of AHS. I found the way they bring together the asylum and the Catholic church really fascinating and figured there was something there. It was a side project, while I worked on turning my PhD thesis into my first book, and it allowed me to keep my interest in American popular culture alive (I’m an Americanist at heart), while also filling what I perceived to be a gap in scholarship. There are now far more articles on AHS. Anyway, the article was spotted by another AHS fan and scholar, Jess Clark, and together we decided to put out a call for papers on the series for a special issue, which was published in the European Journal of American Culture in January 2019. The response was so good that we decided to do an edited collection of essays, taking all the submissions that focussed specifically on sexuality and queerness. I took this project forward with McFarland and…here we are!

Review Fix: Any challenges during the writing process?

Earle: Juggling contributors always comes with challenges, of course, but none of them were massive. In fact, it’s cheesy to say it but the contributors for this book have been overwhelmingly brilliant. A few people dropped out for various reasons—totally normal and understandable. Everyone else has met deadlines, complied with everything asked of them by the press—generally been a dream to work with. The funniest challenge came from the original call for papers. One author submitted a full paper (9000 words!) on the importance of Charles Brockden Brown for the development of American horror stories. It was brilliant…but totally not the thing. The author was not pleased to be rejected, even though I’d recommended other places to submit. Folks—always read the call carefully! When I came to write the introduction, I asked my partner to proofread. He is a computer scientist and never watches horror (or television) so he was rather taken aback by what I’d written…leading to some hilarious conversations about the openness of humanities academics. Who knew that sex wasn’t often discussed in CS?

Review Fix: Why does AHS matter?

Earle: It matters for a couple of reasons.

• TV as a barometer.

The stuff we watch on TV has always been a sort of barometer of social feeling and mores. I wonder if it’s that scholars have become more receptive to TV studies or that TV showrunners are aware of the academic lens or both…but there seems to be a lot more high quality, politically and socially astute TV coming out at the moment. Streaming services certainly help because they circumvent a lot of the issues of broadcast TV.

• Horror as a space for ‘working through’.

I really like the concept of ‘working through’—it comes from Dominick LaCapra’s work on trauma and history (he developed it from Freud); he sees it as part of the process of reconciliation when the individual seeks distance from the trauma and aims to gain critical insight. Horror is a great space for creating this distance and ‘abstracting’ a problem to then make it seem more approachable or manageable. A lot of the issues that AHS has tackled are really difficult, and timely, but their approach opens the discussion in ways not typically available to other genres or media forms.

AHS has done quite well with queer representation—as well as including same-sex relationships, there are also poly couples and trans characters (played by trans actors). There’s still a lot of the ‘bury your gays’ trope but, despite the horror content, LGBTQ+ characters are doing better in AHS than in most other prime time TV programs.

Earle: I’ll confess this here: I’m not a TV scholar. I’m a comics scholar and an Americanist, who dabbles in other forms occasionally with full understanding that this is not always 100% supported by those whose research focuses there. I’ve published a few articles in film studies journals and the JPC one on AHS season two but beyond that…my background is not much.

Review Fix: Who’s your favorite element of the show? Why?

Earle: The use of historical people, interwoven with fictional characters and situations. These people are so often taken from the ‘dark’ side of American history and it’s fascinating to see how the writers imagine they may interact with different time periods and situations. Seeing the tyrannical New Orleans socialite Delphine La Laurie turned into a maid was a particularly good decision, I think. I also really enjoy (if that’s the word) the repeated appearance of serial killers, especially because many of them are included without particular introduction, suggesting we know who these people are. We don’t need to be told because they are so crucial to American history and popular mythology that they are as recognizable as key politics or other public figures.

Review Fix: What did you learn about yourself through writing this?

Earle: I learned that co-ordinating academics can be like herding cats. The contributors to the collection were all fantastic and ready to discuss changes, reply to emails, and help with sending information when needed. However, I have learned that I am not as patient as I might like to think and my blood pressure took a few steps up when replies didn’t appear immediately. Yes, yes…I know this is entirely on me and I’m certainly working on it. It wasn’t until I had publisher deadlines that were also dependent on other people that I realized how much of a control fan I am! I also learned (or reaffirmed the knowledge) that I really love being part of an academic conversation. Reading the papers and making comments, but also taking their ideas and working them into the introduction is my favorite part of the process—not to mention being able to promote and ‘big up’ the work of these scholars when I brag about the book at conferences.

Earle: Hopefully it will be cited lots as more people begin to look at AHS as a valuable cultural document in horror storytelling. That’s the first aim of most books, right? I also hope it will encourage similar niche collections on such themes in other series—there’s so much excellent television out there that really deserves a lot of academic attention. Anything that can add to that conversation is surely a great thing?

Earle: I’m planning a short paper on another aspect of season two (Asylum), that looks at the character of Charlotte Brown (no spoilers here). Hopefully, it will fit well into a short-articles journal. I’m also writing a comics ‘sort-of textbook’, so firmly back in my research comfort zone.

Earle: New season of AHS premiers soon and I’m sure it’ll be just as ripe for analysis as the previous eight. 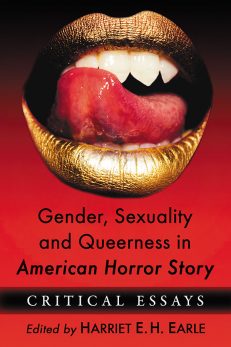 You're viewing: Gender, Sexuality and Queerness in American Horror Story $29.95
Add to cart