From Vietnam to the Arctic Circle

Memoir of a Naval Officer in the Cold War

As a U.S. Navy officer, Jack Whitehouse served aboard a World War II–era destroyer at the peak of the Vietnam War, ran special operations on a patrol gunboat out of Guantanamo Bay following the Cuban Missile Crisis and deployed with the Royal Norwegian Navy to counter Soviet threats north of the Arctic Circle. His detailed memoir recounts American efforts to win the Cold War from the perspective of a young lieutenant on the front lines 1964–1975 and the personal struggles and perseverance of sailors fighting an existential enemy at sea.

From 1968 to 1970 Jack Whitehouse served aboard the U.S.S Buck (DD-761) for two deployments to Vietnam. In 1971 he became the executive officer and then the commanding officer of the U.S.S. Chehalis (PG-94) sailing out to Guantanamo Bay, Cuba. Following a year of language training, Jack became the first U.S. Navy exchange officer with the Royal Norwegian Navy. From 1973 to 1975 he sailed aboard Norwegian frigates, patrol boats and a submarine north of the Arctic Circle.
In 1976 he joined the CIA, serving abroad for most of his career. In 2010, he won the first-place award from the Press Club of Long Island for his regular column in the Fire Island Tide. In 2011 the town of Islip presented him with the Carl A. Starace History Award for his research and authorship on Islip town subjects. He has written four previous books and numerous pieces for a variety of publications. He lives in Sayville, New York. 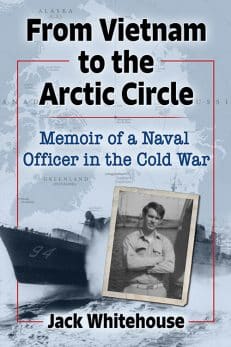 You're viewing: From Vietnam to the Arctic Circle $29.95
Add to cart