From Lumumba to Gbagbo

Africa in the Eddy of the Euro-American Quest for Exceptionalism

In recent years, the Euro-American powers have made multiple armed incursions into Africa. The election of President Obama, greeted by most Africans as providential for their centuries-old troubled relations with the West, instead inaugurated a destructive coalition against Africa. In places like Côte d’Ivoire, Egypt and Libya, the United Nations, the International Criminal Court, the World Bank and the International Monetary Fund have supported military intrusions, arbitrary imprisonments, deportations and political assassinations under the guise of bringing freedom and democracy to benighted Africa.
The destabilization of Africa, the division of the continent into lawless zones controlled by thuggish warlords, the displacement of millions of refugees and the systematic sacking of Africa’s resources are telling: In Africa, the West was not on a goodwill mission. This book examines the West’s policy of aggression in Africa over the last 50 years as a legacy of colonialism, with human and economic costs that are radicalizing African nationalists.

K. Martial Frindéthié is a professor of Francophone studies at Appalachian State University in Boone, North Carolina. His research interests include literature and film and the intersection of literature and political-ideological imagination.

1. Why Are We So Blest? The ­Euro-American Anxiety with Exceptionalism 11

2. Africa Caught in the Eddy of the ­Euro-American Quest for Exceptionalism 27

3. The ­Euro-American War on Algeria: Could a Mother So Yearn for Freedom but Keep Her Children in Bondage? 47

8. We Shall Remember as Far Back as Lumumba 197

9. The Congo’s Bumpy Road to Independence 213 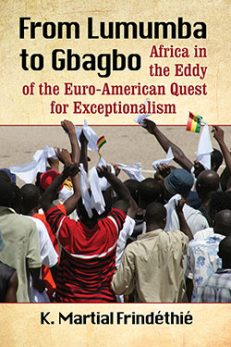 You're viewing: From Lumumba to Gbagbo $39.95
Add to cart