From German Prisoner of War to American Citizen

A Social History with 35 Interviews

Among the many German immigrants to the United States over the years, one group is unusual: former prisoners of war who had spent between one and three years on American soil and who returned voluntarily as immigrants after the war. Drawing on archival sources and in-depth interviews with 35 former prisoners who made the return, the book outlines the conditions that defined their unusual experiences and traces their journeys from captive enemies to American citizens. Although the respondents came from different backgrounds, and arrived in America at different times between 1943 and 1945, their experiences as prisoners of war not only left an indelible impression, they also provided them with opportunities and resources that helped them leave Germany behind and return to the place “where we had the good life.”

Barbara Schmitter Heisler is a professor emerita at Gettysburg College. She has published numerous articles and book chapters, and coedited a book, in the field of international migration. She lives in Lake Oswego, Oregon.

1—The Germans Are Coming 19

3—Repatriation to Germany and Return to America 97

4—Pathways to Immigration: From German Prisoner of War to American Citizen 154

5—Prisoners of War and International Migration 166

“recommended”—Choice; “a fascinating and relevant look at how these men were treated as prisoners, how they interacted with American military and civilians, and how these experiences affected their decisions to immigrate after the war”—Genevapow.com. 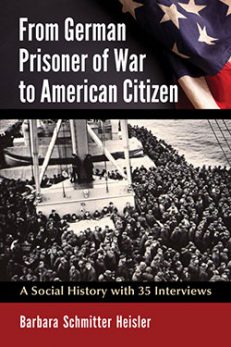 You're viewing: From German Prisoner of War to American Citizen $39.95
Add to cart