A Biography of Ida Bauer Adler

Freud’s 17-year-old case study “Dora” is well known in the literature of psychoanalysis. Yet few know the full story—told here for the first time—of this notable woman, who walked out on Freud after three months and, in a sense, cured herself. Born into an important Jewish-Austrian family, Ida Bauer Adler suffered from “petite hysteria”—loss of voice, difficulty breathing, migraines, fainting spells—brought on by the overt sexuality of her relatives. Growing up in a home beset with syphilis and tuberculosis, she overcame her father’s marital infidelity, her mother’s so-called housewife psychosis and her own seduction by the husband of her father’s mistress. She married, raised a son, started a small business, stayed close with her brother, Otto, leader of the Austrian Socialist party, and survived Hitler’s invasion of Vienna. Eventually, she made her way to the U.S. to rejoin her famous son, maestro of the San Francisco Opera House.

Marge Thorell has written extensively about Karen and Carl Larsson and Sweden as well as psychoanalysis and Dora. An article on Ida Bauer appeared in the Schuylkill Valley Journal. She lives in Philadelphia, Pennsylvania. 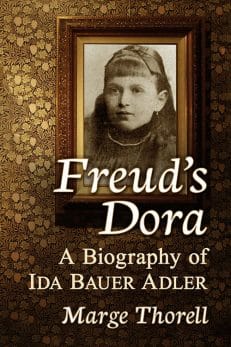